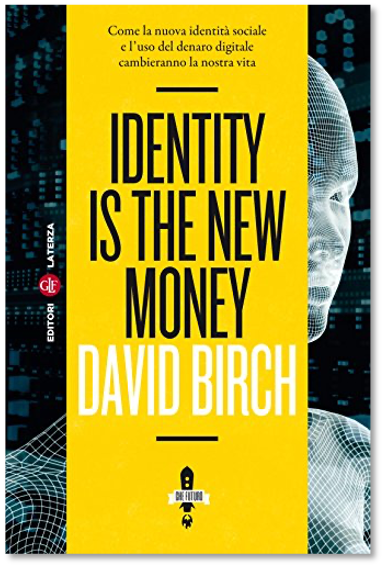 David Birch is the author of a fresh, original and fascinatingly wide-ranging short book about developments in the field, Identity Is the New Money.​ His is the best book on general issues around new forms of money, and new possibilities generated by blockchain technology. You finish his book convinced that something is happening in which the register, and credit more generally, and money, and banking, and identity, are all starting to blur together.

Birch doesn’t claim to have all the answers. What he has done is produce a bold, forward thinking book that grapples with weighty issues in a concise and accessible way.

What is harder to convey is that this short book is densely packed with argument; written, praise be, in English of a straightforward and intelligible sort; has every technical concept explained, and has a breezy and enjoyable good humour that typifies the author himself. Small wonder that he is one of our most revered telco and payment systems consultants.

Reviewed in the United Kingdom on 13 February 2018
Format: PaperbackVerified Purchase

Purchased as part of the core reading for my degree. I love his clarity of prose, and the phenomenal amount of knowledge behind his writing.

5.0 out of 5 stars Though provoking and a good read

Reviewed in the United Kingdom on 7 September 2015
Format: PaperbackVerified Purchase

I really enjoyed reading this book. So much so that I read it over a weekend in a few snatched hours. The book has thought provoking and challenging ideas, but the writing style is accessible. I don’t necessarily agree with all of the ideas, but I think I am on roughly the same path as the author in terms of thinking cash money may have a shorter future than some may think. In the book he manages to convey a clear and compelling message without descending into impenetrable tech and maths. If you are interesting in the future of cash, identity, block-chains or distributed ledger there is a lot to think about and engage with in the book . It was £7.99 well spent.

5.0 out of 5 stars and has a lot of useful background on ideas that led to systems like Sovrin

clever stuff – lots of neat ideas in here – clearer than cryptocurrency hype, dlt nonsense, and has a lot of useful background on ideas that led to systems like Sovrin, plus new personal data worlds like citizenme etc

5.0 out of 5 stars A great contribution to the debate!
Reviewed in the United Kingdom on 6 April 2017

An excellent and well considered intro into this increasingly relevant topic with some great anecdotes. It’s also a concise book which, with my limited attention span to any topic yet alone monetary technology, I liked. I look forward to reading more from this author and hope he covers and hope he expands to include the more broad aspects of reputational management and incorporates more historical comparisons. This is an insightful contribution into a fascinating area of how money and identify will reshape the modern world. Highly recommended.